Ramps ramps ramps.
With the coming of spring also comes the annual barrage of the foodieverse talking about ramps.  The ramp craze has gone so far that there is now a ramp backlash (I predict the burger backlash cannot be far behind).  The blog, Shut Up Foodies even includes ramps in their tag line: “Attention, locavores, omnivores, urban butchers, backyard beekeepers, cheese fanatics, and conspicuous consumers of consuming: Your chickens won’t save the world and we don’t want the life story of everything on the menu. We don’t care what you eat–we just want you to lower the volume. Also, please stop talking about ramps.”
Well as of a couple weeks ago I have never had a ramp.  Never seen one at a farmers’ market, and never spotted one in the wild.  Then as I was walking through the Waukesha Farmers’ Market last week I spotted something that looked like the holy grail of the onion family.  I inquired and I was right, it was a ramp.  I bought two bunches of them. They were ridiculously cheap at a dollar a bunch.
That night I made a spring risotto substituting the ramp for the onion. It was awesome but I think the ramp flavors were somewhat overpowered with the cheese, asparagus, pea shoots, and peas.  So I was wondering what dish could I make that really would showcase the ramps.  Lots of things came to mind but I figured the ramp nuance’s would be lost in dishes like French Onion Soup. Then I had my “ah-haa” moment.  What dish showcases onions like no other?  What dish has onion as such a main focus that the omission of it would completely ruin the eating experience? Only one thing came to mind, the White Castle slider. If a White Caste is so awesome with tiny chopped up reconstituted onions, surely the substitution of ramps would make it better.
White Castle burgers are so tasty because they steam the burgers on  top of some onions.  I wasn’t so committed to this experiment that I was going to use the White Kastle Klone recipe from A Hamburger Today so I took the easy route, buying frozen White Castle burgers and removing the onions before cooking.  Then I tried to replicate the way White Castle cooks onions, which is with steam.  So I added some chopped up ramps to a pan with some water and let them steam until they were cooked through.  I made the burger in the microwave per the directions on the box, but before it was completely cooked, I added the patty to the pan with the steamed ramps just to infuse it with the ramp juices. 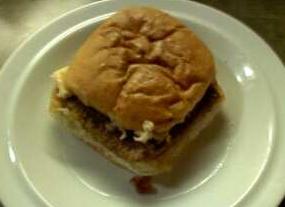 The ramp slider in all its glory

The result?  It was actually pretty tasty.  Even though I used no butter, the ramps added an almost buttery note to the taste of the burger (hmmm maybe I’ll try ramps with a butter burger) but before you start e-mailing White Castle telling them to make their burgers with ramps, I think I can pinpoint the main reason it was so good.  Texture.  The ramps still had a bit of crunch in them which added texture to the burgers, which are often called “slimy” by White Castle detractors.  White Castle onions are reconstituted.  They are chopped dried onions that are rehydrated at the restaurant, robbing them of all texture and adding to the soft slider texture that is the hallmark of the White Castle. To really even the playing field maybe next season I’ll dehydrate some ramps and then reconstitute them and see how that works.

Other Food Sites I Visit

A blog about eating, cooking, and drinking in the Bagder State